On Tuesday, organizers of the Osterlof Open donated a check for $12,000 to the Karen Ann Quinlan Hospice. The funds will benefit the capital campaign for the Joseph T. Quinlan Bereavement Center.

The funds were raised during the Annual Osterlof Open which was held on June 16 at Crystal Springs Resort.

The Carl T. Osterlof Foundation was started by Carl T. Osterlof’s wife, Joan and their eight children as a way to honor his memory and charitable virtues. The Open, ran by the friends and family of the late Osterlof, is a way to raise funds and awareness for charitable causes using his favorite leisure pastime, golf.

This year, in memory of Bonnie Synol’s husband Doug Synol, who was a patient of Karen Ann Quinlan Hospice, proceeds from the outing were donated to the Joseph T. Quinlan Bereavement Center.

Doug Synol was a longtime member of the Osterlof Golf tournament committee. 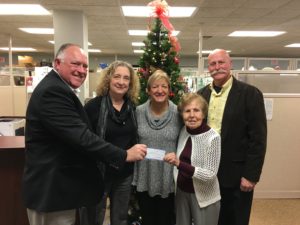