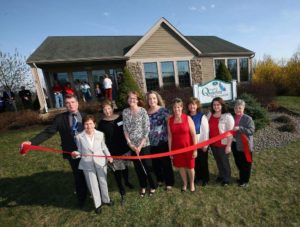 The public is invited to attend an Open House to celebrate the one-year anniversary of the new permanent location of the Joseph T. Quinlan Bereavement Center. The open house will be held on Friday, April 20, 10 a.m. – 6:30 p.m., at the Bereavement Center located on 5 Plains Road in Augusta.

The Center exists for the community. Counselor help those who are finding it difficult to function because of the loss of a loved one find ways to cope.

The Joseph T. Quinlan Bereavement center has continuously served families in the community since 2000. Previously located on 61 Spring Street in Newton, the Center moved to its new, permanent location last April. The building on 5 Plains Road was purchased because of the generous support of the community. The Center also has satellite offices in Hackettstown and Milford, PA.

“Unfortunately, at some time in everyone’s life they will experience the loss of a loved one. The services offered by the staff and the Joseph T. Quinlan Bereavement Center truly help people find the road to recovery,” said Diana Sebzda, MA, LPC, FT, Director of Bereavement.

“The Joseph T. Quinlan Bereavement Center is a sanctuary of safety. I felt unconditional acceptance and support and left feeling renewed and hopeful,” said Charles Stackhouse who received services from the Center.

We encourage those who have not stopped by for a visit in our new location to please consider it on Friday, April 20th. There is no obligation, just stop by to chat with one of our counselors and take a tour. If you know someone in need of help, bring them so they can experience first-hand the warmth, compassion and professionalism of our staff with no pressure of commitment.

A free travel tumbler will be given to the first 40 guests to attend the Open House. For more information or to RSVP please call 973-948-2283.

« Who can benefit from grief/bereavement counseling?
2018 Hospice Honors Photo Gallery »