The donation was the result of the “Subaru Shares the Love” Campaign. Subaru of America, Inc. marked it’s 50th Anniversary in the United States in 2017. And for the second year in a row, there was no cap on the total donation from Subaru of America to its Share the Love charitable partners.  2017 marked the tenth anniversary of the event.

From November 16, 2017 to January 2, 2018, Subaru donated $250 for every new Subaru vehicle sold or leased to the customer’s choice of a national charity or a pre-approved hometown charity. Karen Ann Quinlan Hospice was selected as the hometown charity to be the recipient of the annual campaign.

The initial check to the hospice was for $14,584. Wally Darwish, general manager and Donald Allen, district parts and service manager each added additional donations to surpass the original $15,000 fundraising goal. “We are about reaching goals at this dealership,” said Allen. “Goals of the families we serve in the community, our employees and charitable organizations.”

“Subaru World of Newton is a committed partner in the local community. Over the years, we’ve faithfully donated to local organizations, like the Karen Ann Quinlan Hospice, hosted pet adoptions, rain coat drives for Project Self Sufficiency and funded our local elementary school’s projects. Paying it forward is important to our dealership and we’re always looking to provide expert care and love to those we interact with every day,” said Darwish.

“We are so thankful for the continued support of Subaru of Newton,” said Julia Quinlan. “There are so many families in the communities we serve that will benefit from this generosity.”

The Karen Ann Quinlan Hospice is a not-for-profit organization which provide a full continuum of high quality medical, emotional and spiritual services to individuals requiring hospice, family members and the community. 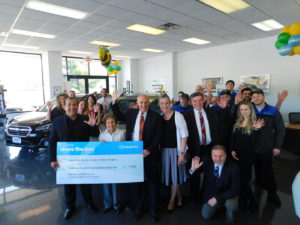